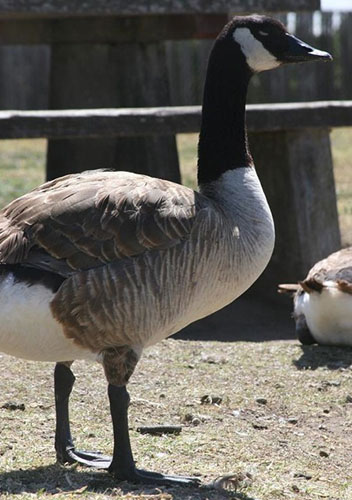 It had been a while since I had checked the waterfowl at Pinto Lake in Watsonville. This would be my location of choice for today’s rounds.

When I arrived, I was shocked to see a large gaggle of Canada geese, perhaps 50 or more - the last time I had visited, there were maybe a dozen.

I approached slowly, on foot, with only camera in hand, and applied just enough pressure to cause each bird to rise from its seated position.

I scanned the group for injuries until I found one with fishing line hanging from its right wing. The goose was pecking at the line, trying to pull it free of its feathers.

At first glance, the hook appeared to be lightly sitting inside the wing, as if it would fall out on its own, however the line was more than a foot long and I was worried about it getting snagged on the bushes as the goose entered and exited the water.

I went back to my vehicle for my bag of grain to bait the bird close for capture.

Once the geese saw that I had food, they quickly encircled me, except for the one with the line, of course.

This goose was very, very skittish, and no matter how many times I changed my position, it refused to stand to my side - which is where I need it to be to capture it.

At one point, the bird became frantic to get away, so I quickly positioned myself between the bird and the water - now it was on full alert! 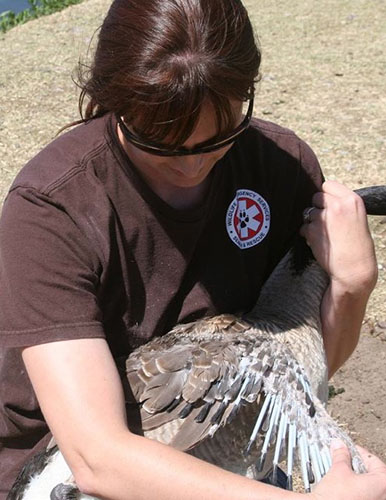 I had the advantage, though, because most of these geese, including this one, were flightless. It’s that time of year, their annual feather molt, when they shed and re-grow their outer feathers. This goose was vulnerable when it couldn’t get to the water and it knew it!

I gave up trying to catch it on my side. I would try something new. I felt I had nothing to lose.

So, the next time the goose was in front of me, I dropped to the ground and had my hands over its wings. It wasn't pretty, but I got my goose!

I carried the goose to my vehicle to better assess the injury.

I placed a pillowcase over the bird’s head to reduce stress as I evaluated it.

As I had thought, the hook hadn't penetrated the skin, but rather, was caught on a pin feather - a blueish tube-like structure encasing the bird's new feathers. As moulting birds preen, the waxy coating breaks away and the new feather unfurls. 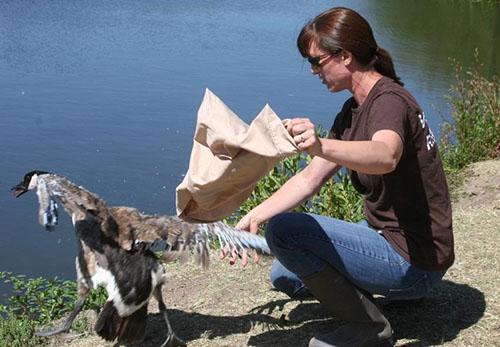 I was able to remove the hook and line easily. With no further treatment necessary, I carried the goose back to the water's edge and released it.


Thank you to Donna and her husband Daniel who took photos for me!

This gal did an awesome job rescuing this goose. She was calm, cool and fearless. The funniest part was after she captured the goose, the other geese nonchalantly made their way to the water to get away from the goose whisperer. LOL. Thank you for caring for and loving wild animals. Daniel and Donna Stephens

"The goose whisperer" how so cool. Yes, thank you all for doing what you are for the "voiceless" creatures!!!