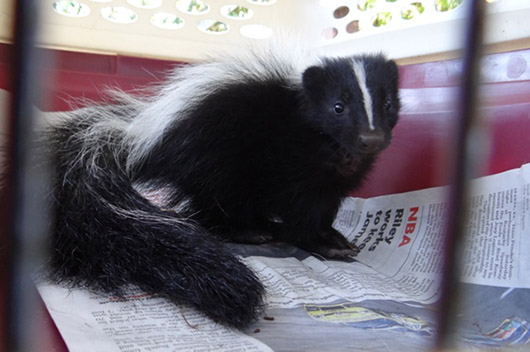 Another juvenile skunk was found caught by a T-Rex.

The Trapper T-Rex is one of the newer rat traps, known for its "teeth" and "ferocious" grip.

The force behind these spring-loaded snap traps are meant to kill mice and rats quickly and the interlocking "teeth" make escape nearly impossible... for any animal.

Today, we received a call from a resident of Soquel - she saw a skunk walk through her yard dragging, what she described as, a cow bell.

We knew right away what it was.

Last year, we rescued a poor skunk that had gotten the tip of her snout caught. She eventually lost her nose. Read her story, HERE.

After searching the premises, we finally found it hidden in a drainage area. Check out the video of its rescue, below.

The skunk was transported to skunk expert, Monique, where it is recovering.

While it is not illegal to place rat or mouse traps outdoors, there should be a warning to consumers about the risk snap traps pose to other animals - cats, dogs, and wildlife. We will be contacting Bell Laboratories, makers of this type of mechanical trap and asking them to add some cautionary language on packaging and promotional material.

Wonderful job! I'm glad you were able to help the poor little fellow.