One of our lead responders, Deanna Barth, takes time - nearly every week, to make her rounds, looking for injured wildlife. Here is her report from today:

I stopped at Moss Landing Harbor on my way home from work this afternoon to check for birds with entanglements. This is a very popular fishing area so I am usually able to fill a large bucket full of trash and fishing line each week.

From the parking area, I looked out towards the jetty that is usually lined with a hundred or so pelicans and cormorants, and was surprised to see it taken over by sea lions! 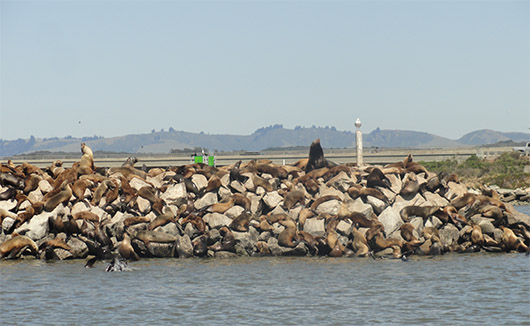 I started to walk toward the jetty to get a closer look and was horrified to find the sandy cove littered with a dozen or more dead sea lion pups in varying degrees of decay.

The plight of the California sea lions has made headlines recently, but seeing it up close was heart wrenching. So many tiny lifeless bodies that never had a chance.

I glanced at each one as I walked by, checking for flipper tags. I also checked a few dead birds for leg bands. This information is important to report to the organizations that originally identified these animals. 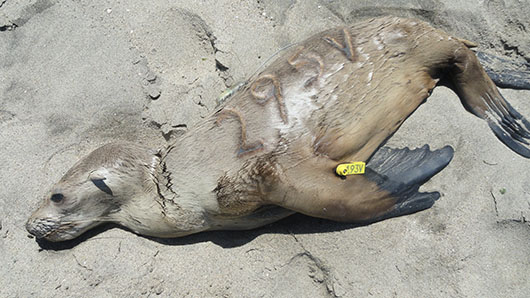 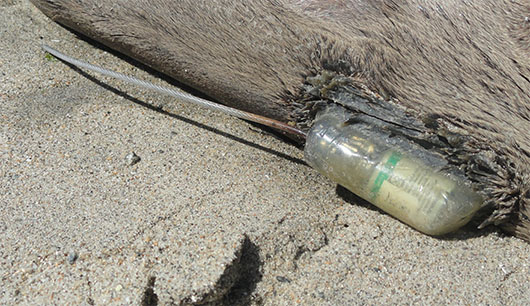 I stopped in front of a dead pup that stood out from the rest. It had a yellow tag, a large number branded on its side and a transmitter glued to its back. I immediately contacted The Marine Mammal Center and they made arrangements to pick it up.

I returned my attention to the birds, scanning each pelican for injuries through my binoculars when I felt the presence of someone behind me.  The gentleman and his wife had just been walking on the other side of the beach and found a bird that appeared to need help. He was unsure what it was when I asked, and responded with only “black and white.”

The bird had been lying in the sand when he witnessed a Labrador Retriever run up and pick it up in its mouth. As soon as the bird began pecking at the dog’s muzzle, it was released and the dog trotted off.

I crossed over the top of the sand dune and could see a Common Murre in the distance. The bird was a few feet from the water’s edge and appeared weak and disoriented. Thankfully, there were no obvious wounds or any indication of trauma from being picked up by the dog. I was able to scoop it up with my hands, easily, and place it into a cardboard carrier for transport to the SPCA for Monterey County wildlife center. 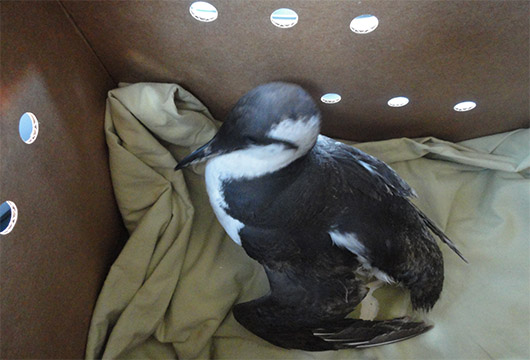 THANK YOU, DEANNA, FOR BEING SO PROACTIVE AND
MAKING TIME TO LOOK FOR AND HELP INJURED WILDLIFE!

Thanks for helping the bird!