Thanks to the expert care received through Native Animal Rescue's skunk expert, Monique Lee, the skunk that was caught in a Gophinator trap was set free today in the woods just below where she was found. Click HERE for the original story. 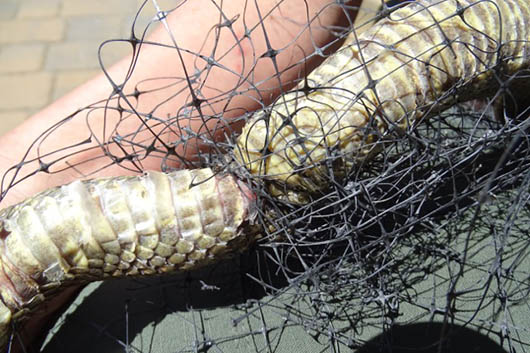 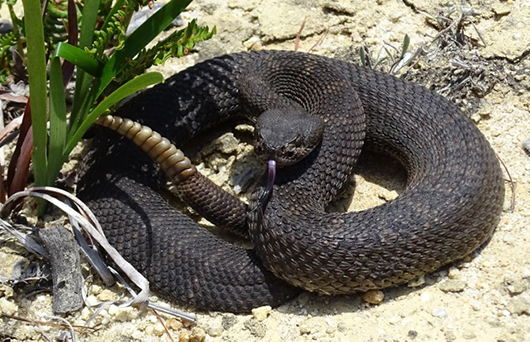 This morning we were called to help rescue a baby skunk that a homeowner found in her garage, stuck in a large clear plastic bag. It must have wandered into the garage when the door was left open the evening before, and just happened to get itself stuck inside the bag as it was exploring. The skunk was immediately set free outdoors where it made a prompt exit into the bushes. Free again, at last! 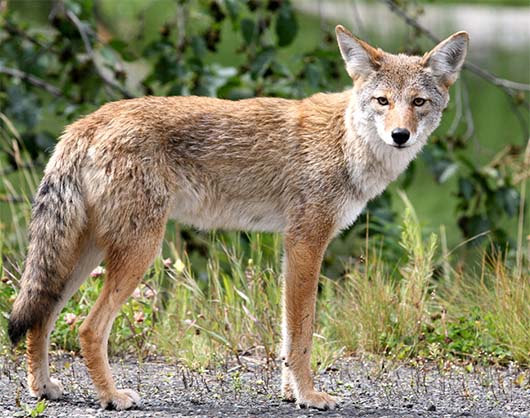 In addition to managing WES, my husband and I run a for-profit business where we help people resolve their conflicts with wildlife - be it a raccoon in the attic, a skunk under a shed, bats, rats, you name it.

When it comes to coyotes, we face a tough crowd. By the time we're contacted a coyote has often become a problem - there's been a loss or there's fear of an imminent attack. The animal is a perceived threat that must be removed without delay.

When it comes to coyotes, we find people are usually set in their misbeliefs and are far less willing to change their habits than with other species - less willing to adapt to living with these animals as part of their environment, less willing to invest in making modifications to their property even if that is what will solve the problem, yet, they are often quite demanding that something be done, admonishing local officials for not taking action to protect their home, family and pets.

For these people, we offer the Coyote Challenge. 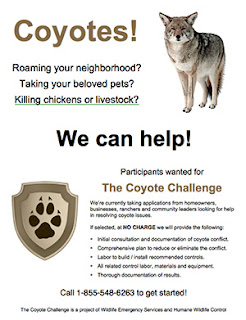 In return, participants agree to share their account of the process and the results - which we expect will be that their coyote problem has been resolved, for good.

With each challenge being documented from beginning to end, we see this as a great opportunity to help people and coyotes while gathering conclusive evidence that non-lethal control methods do work.

The Coyote Challenge officially launched last month and we have 3 applications in the review process.

Duane and I will be donating our time, but we are hoping to collect about $1,500.00 to cover supplies, equipment and associated travel costs. Please help if you can.

For those who contribute $100.00 or more, we have a special treat - you'll be invited to share our journey through a private blog where we post each challenge with frequent updates.

Thank you for supporting the Coyote Challenge!

Taking a stand for our wildlife 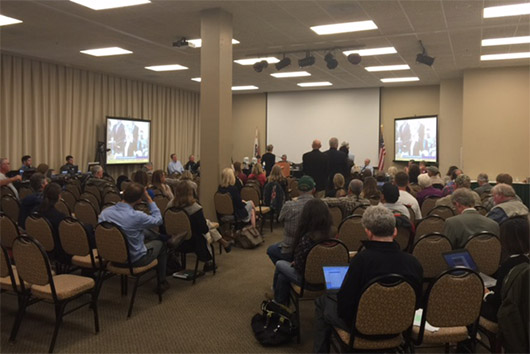 This week, the California Fish and Game Commission convened in Mammoth Lakes, CA.

These meetings, allow the public and other stakeholders an opportunity to have a voice in the management of our state's wildlife.

Understanding the Commission's role can be a bit confusing... In basic terms, California State Legislature creates Fish and Game laws. The Fish and Game Commission, consisting of an Executive Director and 5 members appointed by the Governor, implements regulations to further clarify Fish and Game Laws as well as set hunting and fishing regulations for the state. The Department of Fish and Wildlife along with the general public submit recommendations and supporting documentation to the Commission to assist them in their decision making. 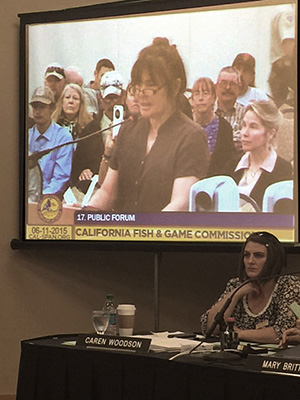 Yesterday, I spoke before the Commission on trapping.

Last year, Dan Fox, president of Animal Pest Management, sent a letter to the Commission asking that a section of the regulations be modified to exempt licensed pest control operators from needing written consent from neighboring homeowners before they can set traps to take and kill wildlife.


Subsection of 465.5 (g)(3) was introduced in 1980 to protect people, children and pets from being harmed by potentially dangerous body gripping traps like the leghold, snare or conibear. It also protects neighbors’ rights to the shared resources – the resident wildlife. It provides them a voice – a say in the management of these animals – a right that should not be watered down or taken away, especially by big business.

This request to change the regulations is not about protecting people's property of managing problem animals as much as it is about money.

Pest control operators make an incredible living exterminating neighborhood wildlife, charging upwards of $100.00 per head. With a single backyard yielding 3 or more animals and the assurance of repeat business if nothing is done to prevent future conflicts, it's easy to see why trappers don't want anything to stand in their way.

Trapping and killing nuisance wildlife is an outdated practice. It is not a lasting solution as it does not address the actual problem. That said, the way trapping and killing is promoted in the pest control industry is, in my opinion, nothing short of a racket - conducted in the name of the State.

It's my hope the Commission, in its review of its predator management policies and trapping regulations, will require non-lethal control methods before lethal management is allowed, and, they do not strip away neighbors' rights to say how their wildlife is managed.

In researching this issue, I discovered something very disturbing: pest control operators are not required required to report how many animals they kill each year. Neither are those who trap privately on their own property.

Imagine if 2% of households in California used lethal methods to control wildlife. That could mean 250,000 mammals - fox, bobcat, raccoon, opossum, coyote, skunk and squirrel - exterminated each year without anyone knowing.

All other forms of take are documented but not the the toll by the pest control industry. To me, this seems negligent - that such a large number of wild animals - game, non-game and fur bearers can be killed each year and the State does not require documentation.

Therefore, I requested the Commission's attention to this, asking that they consider modifying the trapping regulations to require annual reporting by pest control operators. Additionally, I asked that they come up with some method of reporting that would reduce double profiting by trappers.

You see, a pest control operator who is also licensed for recreational trapping (a matter of ticking two boxes on their application) can trap a nuisance bobcat, skin it, then, during bobcat trapping season, they can say it was taken recreationally and then legally sell the pelt for $1,000.00 or more.

That, too - bobcat trapping, was on the Commission's agenda. The Bobcat Protection Act (more HERE), recently signed into law by Governor Brown, requires the Commission to amend bobcat trapping regulations and establish no-trapping zones. Thanks to Commissioner Rogers, a statewide ban is, once again, up for consideration.

If you have time, consider writing a letter to the Commission, expressing your support of a statewide ban on commercial and recreational bobcat trapping. 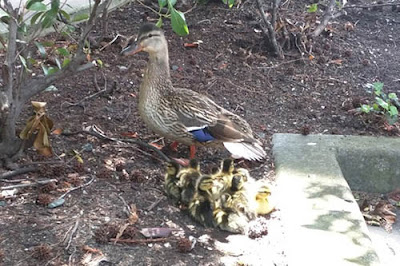 This afternoon, a mallard hen and her newly hatched ducklings were found in a parking lot on the Google compound in Mountain View. Davis, a member of the Google family called WES for help.

With guidance from our experts and help from a couple of other concerned Googlers, the ducklings were carefully collected into a milk crate. 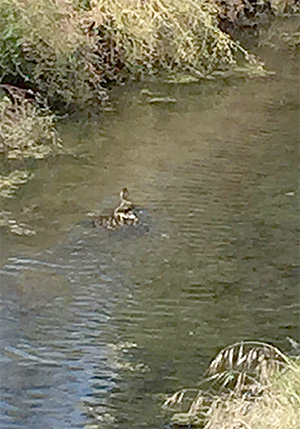 Then, the team started a slow walk toward Permanente Creek - just a couple of blocks away. The hen followed, nervously.

Finally, they reached the creek!

Following our direction, Davis gently dumped the ducklings out - all at once, and backed away. The hen quickly gathered their attention and led them into the stream and toward the wetlands.